The royal palace: A unique slice of history

Although no longer the home of the Dutch royal family, the Royal Palace (Het Koninklijk Paleis) is certainly worth a look if you are visiting Amsterdam. Situated on Dam Square in the very heart of Amsterdam, the Palace was originally built as the city hall for the inhabitants of Amsterdam in 1648. After a short spell in the early 1800s, when the building was home to the French King Louis I, who ruled the Netherlands at the time, and later to the French Governor, the building finally became the home of King William I of the Netherlands, and many generations of the Dutch royal family have used it since then.

Marvel at the rich past

Open to the general public, except when it is being used for official events, on most days visitors can enjoy the architecture, marble, paintings and luxury interiors of the Palace. A free audio tour in various languages is provided as part of the entrance fee of €10.00, while guided tours with historians can be arranged for larger parties. The superb collection of Empire furniture, clocks and chandeliers in the Palace, dating back to the French occupation, is one of the best preserved and most complete collections in the world.

Today, the head of the Dutch royal family is King Willem-Alexander, but what not many people know is that he is also 889th (give or take a few cousins along the way) in line to the British throne! The royal family in the Netherlands is related to just about every other monarch in Europe. Through his great-great-great-grandfather Jan Willem Friso, Prince of Orange, King Willem-Alexander is a cousin to Margrethe II of Denmark, Albert II of Belgium, the Grand-Duke of Luxembourg, Harald V of Norway, Juan-Carlos of Spain, Albert II of Monaco, and Queen Elizabeth II.

Your ideal base for visiting the Royal Palace

Hotel Amsterdam De Roode Leeuw, on the Damrak, is situated around the corner from the Royal Palace, making it an easy stroll from the hotel to the Palace. The Damrak is one of the oldest parts of Amsterdam. When you arrive at the Central Station in Amsterdam, the Damrak leads you straight into the heart of the city, which means that even today it is the main entrance for millions of visitors and residents to the city. A visit to the elegant Dutch department store De Bijenkorf, situated opposite Hotel Amsterdam De Roode Leeuw, is also highly recommended. 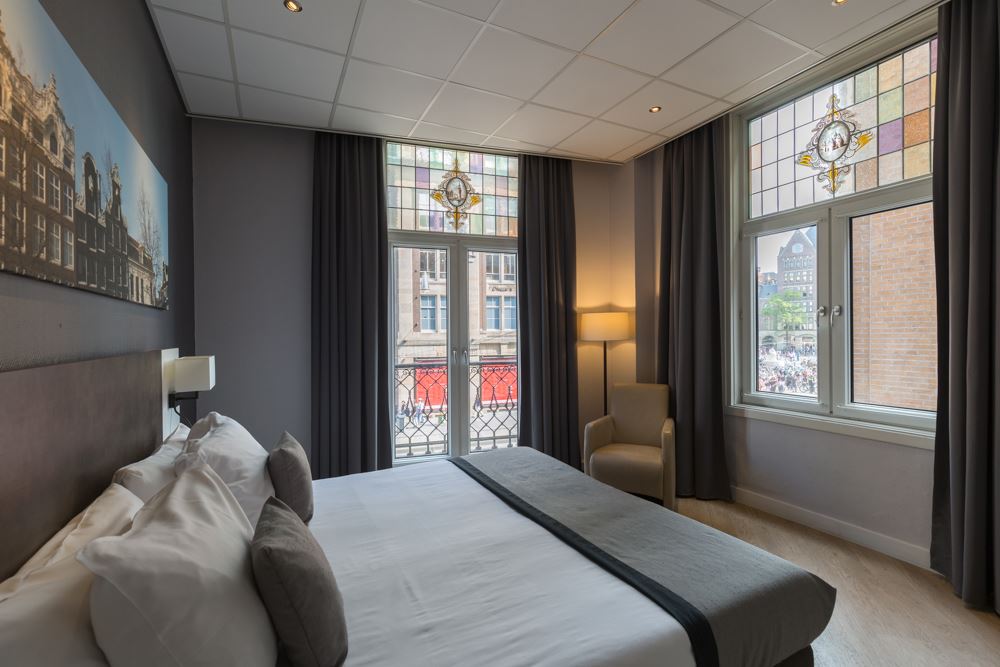 Brasserie De Roode Leeuw dates back to 1911 and enjoys an outstanding reputation, renowned for its Dutch regional specialties and is considered an Amsterdam institution.